When you hear the name Gauntlet, and you're around my age, it might instill a sense of nostalgia - of the original arcade game that sucked quarters out of you faster than Takeru Kobayashi can stuff hotdogs into his face.

WB Games released a 2014 re-envisioning of the original made by the good folks at Arrowhead Game Studios. As someone who had played the original (and the sequel) quite heavily as a kid, I had mixed feelings about there being a remake. Until I saw the trailer, that is.


Without haste I ordered a copy day-and-date, and got it installed. I was quite excited to dive deep into the familiar dungeons, with my favorite crew of dungeon-crawling misfits, wanting to see if it could properly represent the original game. 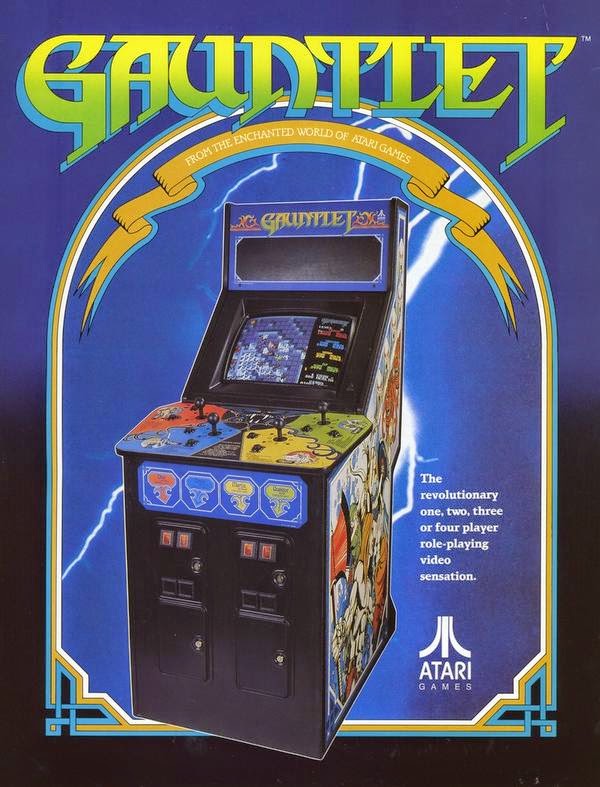 The original Gauntlet was not easy. As the name implies, you run through a gauntlet of things looking to kill you. With food to heal your wounds being very sparse, but gold being plentiful - it keeps up the sense of urgency to finish that level. Because if you don't, you lose all that wonderful loot you fought so hard for.

They also have the crown. I also like to refer to it as the 'how to make your friends hate you' crown. It is a random spawn, you kill a mob and it drops the crown. If you are wearing it at the end of the level, you get a healthy bonus. The 'how to make your friends hate you' part? Well, if you are wearing the crown and you get hit, you drop it. And someone else can grab it. And the other way around. This turns the greediest players into self-preservationists. And you start to hate them for it. Doing what they can to not get hit, sometimes getting you surrounded by baddies as a result.

Oh and you can shoot the food.

Interesting mechanic to be sure. You can shoot the food and the relic potions, and interestingly enough, some of the mobs will also destroy your food. Usually when you really need it. I was surprised when I first saw an archer take aim at that delicious turkey that I was running towards, only to shoot and destroy it mere inches before my character could grab it.

Overall the game plays well, handles much like the original, and has lots of variety to keep you interested.

Matchmaking: Now, matchmaking systems are only good if you have people online and willing to suffer public games. I can't imagine Gauntlet being so hugely popular that there is a never-ending queue of players waiting to get into a public game. So sometimes you have to wait. Or the game just spits you out because no one is available. And also, if you want to try public matches on some of the lower difficulties... best of luck.

Upgrade system: The 'upgrade system' is a term best used loosely. You get relics, which can be triggered if you acquire potions in a match. That's all fine and well. The relics can be upgraded a few times also. This is pretty good. The right relic on the right character can make a huge difference. But some of the relics are pretty pointless. But that's not the bad part. The part I don't like is the armor 'upgrades'. They are purely cosmetic. Want a better weapon? A new tunic? Maybe a new hat? Well, beat 'x' level on 'y' difficulty and pay 'some amount' of gold and you get your upgrade. Which does nothing but look neat. Unless you're the warrior. His weapons and armor look terrible.

Single player: Soloing in Gauntlet is not impossible, but very, VERY difficult. This game really is meant to play with others. But, in the same spirit of the original, it also wasn't really meant for soloing either. Sure, you can grind dungeons for gold to get a few upgrades and some 'mastery' ranks... but it's a total slog.

I hope I didn't sound too harsh about the game. It's actually quite fun. It brings back a strong sense of nostalgia for the original game, is a lot of fun when you are playing with friends, and the varying difficulty gets you a lot of future replays. To top it off, the soundtrack is good, the gameplay is very solid, and the developer fixes any bugs/make game updates quickly and frequently, all good things.

If you're looking for something fun to play and have some spare cash, I' d say grab it. The public matches are pretty good, and if you have friends that already own it, even better. If you're short on cash or not 100% sure if you'd enjoy it, wait for a Steam sale. It'll likely go on for $15 or less for the Steam Winter Sale.